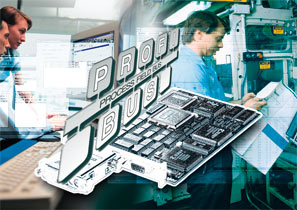 PROFIBUS Configurator is a versatile configuration tool. It allows the user to define PROFIBUS
networks from a master’s point of view. PROFIBUS Configurator can be used in various application
scenarios to configure Softing PROFIBUS DP masters.
Depending on the use case the functionality reaches from defining the network structure with its
connected devices and their individual device parameters over interactive online tests of particular
inputs and outputs up to the definition of tag names and data types for all available process data as
they are used by Softing’s PROFIBUS OPC server.

This allows for scanning the network for connected devices and for interactive
communication with these devices. A network configuration can be activated using the interface board as the active master for the devices connected to it. Defining tag names for process variables

For each configured device it is possible to assign named process variables to its inputs and output. These variable are also assigned a data type (e.g. Boolean for
single bits or Signed Byte for an analog input). These variables may subsequently be used inside the PROFIBUS Configurator for purposes like commisioning the network. For that purpose variables can be read and written as soon as the current configuration is activated.
Furthermore, the named variables serve as so-called “OPC items” if such a configuration is used by a Softing PROFIBUS OPC server.

Release available with a  SOFTING card, as hardware dongle

Version ( End Of Life ) Available with a  “Licence Manager”